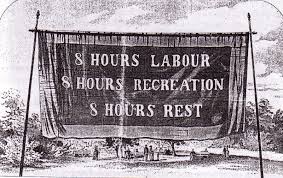 Why is May 1st a public holiday in Spain (and in some other countries)?

Tomorrow will be May 1st, the International Workers’ Day, and it is a bank holiday in Spain (so we get a day off work) and in many other countries all over the world.

Dark blue:  Labour day falls or may fall on May 1st.

Light blue: Another public holiday on May 1st.

Light red: No public holiday on May 1st, but Labour Day on a different date.

Dark red: No public holiday on May 1st and no Labour Day.

Its origin is on May 1st when people started claiming an 8 hours labour. It was allowed to work up to 18 hours until that moment, even though the most common thing was to work 14 hours a day approximately. After many demonstrations and violent riots, in the end of May the 8 hours labour was accepted for many thousands of workers in the United States. That is why this date is celebrated in a lot of countries!

Labour day in the United States

This date is also known as ‘Labour Day’ in some countries, such as the United States.

In this country, the holiday is celebrated on the first Monday in September because of the first parade organized in New York by the Knights of Labour (September 5th, 1882). This other date was chosen in order to avoid any potential riots if May 1st was celebrated instead. However, it is also dedicated to the social and economic achievements of workers.