Oregon has only one national park but is by no means lacking in scenery. With 360 miles of public beach, gorges, wild rivers, forested peaks and fossil-rich desert, the state is packed with natural wonders 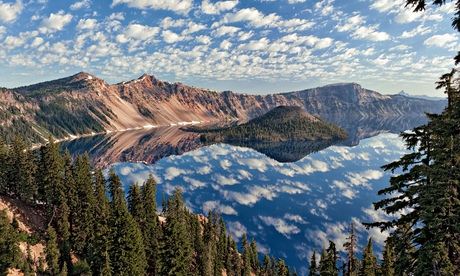 Today, Crater Lake national park in western Oregon is known for having one of the deepest, clearest lakes in the world, but 7,700 years ago, the landscape stunned witnesses for a different reason: the eruption of the Mount Mazama volcano, which created Crater Lake, is thought to be one of the greatest geologic catastrophes ever witnessed by humans. After it erupted, Mount Mazama collapsed, leaving behind a crater more than 1,200 metres deep – and 8km north to south and 10km east to west – that eventually filled with rain and snowmelt.

Along the crest of a line of volcanoes known as the Oregon Cascades, Crater Lake is a winter sports playground. Summer visitors should plan to circumnavigate the lake on the 53km loop road, which skirts the edge of the crater – or hike down to the water on the 3.5km Cleetwood Cove trail. Accommodation is available at the Crater Lake Lodge or at two campsites (reservations recommended). Backcountry camping is also allowed along the Pacific Crest trail, which runs through the park on its way from Mexico to Canada. 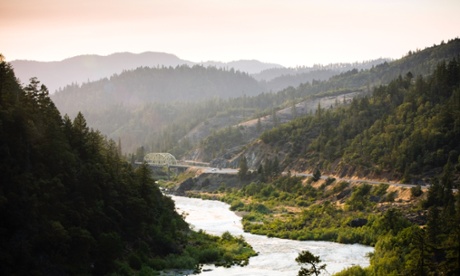 Oregon’s Rogue river, in the south-west corner of the state, is well-named: this rushing river is famous for its rugged scenery, wild rapids and epic salmon runs. Visitors can explore the Rogue by raft – the 35-mile stretch downstream from Grants Pass is one of the top whitewater runs in the country – or on foot along the  Rogue River national recreation trail, which runs parallel to the river for more than 80 miles. Fishing for chinook and coho salmon, steelhead and rainbow trout is legendary on the Rogue and a number of dams have been dynamited in recent years to restore fish migration pathways.

People have lived along the Rogue river for at least 8,500 years but its most famous denizen is probably the author  Zane Grey, who wrote more than 90 books about the western frontier. In 1926, Grey bought a miner’s cabin at Winkle Bar, where he wrote his novel Rogue River Feud and a collection of stories, Tales of Fresh Water Fishing. His cabin still stands today and is open to the public. 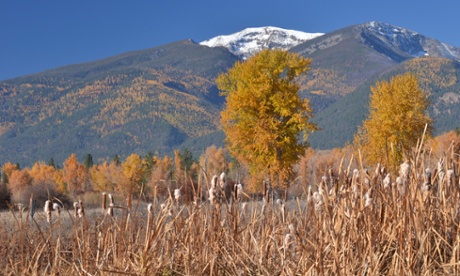 Oregon was once home to millions of huge trees but decades of logging have felled many of its most spectacular giants. A few pockets of old-growth woods remain, however, including this gem, near Corvallis. Named for a Native American legend, Marys Peak is home to one of the last pockets of pure, old-growth noble fir, along with some magnificent Douglas firs.

At 4,097ft, the summit of Marys Peak is the highest point in the Oregon Coast Range. From the summit, accessed via the Summit trail or a paved forest service road, visitors can marvel at the line of Cascade volcanoes to the east, the lush, green Willamette valley below and the Pacific Ocean to the west, making this one of the best places for views in the state. Not even the somewhat unsightly weather station on the summit can detract from this. Camping is available below the crest at the Marys Peak campground. 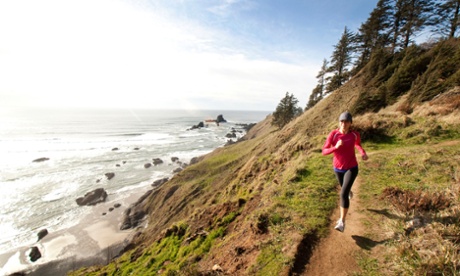 All 363 miles of Oregon’s coast is open to the public, with beach access from the Washington state line all the way south to California. Ambitious beach walkers can hike the entire way on the Oregon Coast trail, which runs up and over headlands and around inlets for 425 miles. Dozens of state parks and recreation areas line the coast, featuring tide pools, seal rookeries, sea stacks and lighthouses.

One of the highlights of the coastal park system is Ecola state park, just north of the town of Cannon Beach. The nine-mile section of coast wraps around Tillamook Head, a forested promontory that offers incredible views up and down the coast. A number of rocky sea stacks decorate the beaches here, including Haystack Rock, which has long served as a landmark for travellers and sailors. Offshore, Ecola’s waves are popular with surfers. No camping is available here but sites can be found nearby at Oswald west state park to the south and inland at Saddle Mountain state natural area. 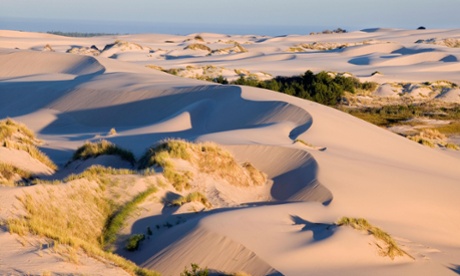 Most of Oregon’s coast is beautifully rugged and rocky, but this 40-mile section of beach between the Coos and Siuslaw rivers is home to the largest expanse of coastal sand dunes in North America. Here, windswept dunes tower up to 150 metres above sea level, making for excellent hiking, whale watching, horse riding and off-road driving. Camping is available in a number of established campsites, as well as in primitive sites along the Siltcoos river. More sites can be found in Jessie M Honeyman state park to the north and Umpqua Lighthouse state park to the south; reservations recommended.

Oregon Dunes does a great job of keeping the quieter foot-traffic-only areas separate from the motorised off-highway vehicle areas. If you’re into the off-highway vibe, the largest off-road area stretches between Spinreel campground and Horsfall Road. Dune buggy rentals are available from several outfitters in North Bend. 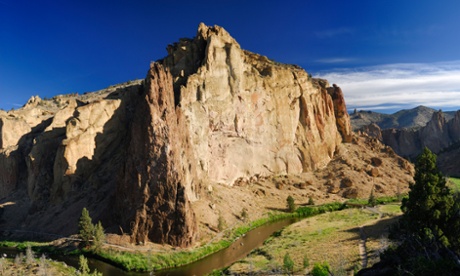 Oregon is famous for being green, but the red, yellow and orange hues of Smith Rock state park, near Terrebonne, serve as a colourful gateway to the state’s arid and beautiful eastern desert. Smith Rock is famous among rock climbers as the birthplace of modern sport climbing, where climbers follow bolted routes up challenging rock faces. Smith Rock has some of the hardest sport routes in the world, including the first 5.14 grade climbever completed in the US. Even if you’re not a world-class rock climber, Smith Rock has hundreds of routes, many suitable for beginners; several reputable guiding companies are based in the area. Visitors who prefer to stay close to the ground can explore miles of hiking and mountain biking trails and the scenic Crooked river has excellent fishing. Primitive walk-in camping is available in the park, first-come, first-served, as well as at the national forest Skull Hollow campground, just five miles down the road. 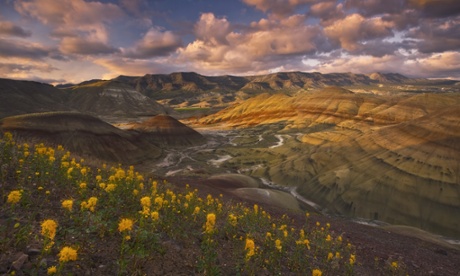 The brightly hued hills of John Day are spectacular, but it is what lies beneath the surface that makes this desert region of eastern Oregon famous. Hidden beneath the rolling red landscape is one of the world’s richest fossil deposits from the Cenozoic era, also know as the Age of Mammals. Around 30m years ago, rhinos, camels, giant ground sloths and saber-toothed cats roamed a lush grassland before being buried by a series of volcanic eruptions, which preserved their bones in colourful layers of tuff. The monument is divided into three separate parks: the Sheep Rock, Painted Hills and Clarno units. Visitors are advised to start at the Sheep Rock unit, which lies north-west of Dayville. Here you can visit the park’s main facilities and tour the fossil museum at the Thomas Condon Paleontology Center. No camping is available within the park, but there are plenty of sites in the nearby Ochoco national forest. 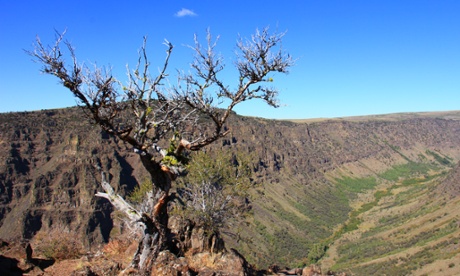 If you’re looking to get away from it all, head to the Steens in south-east Oregon. Here, wild horses roam a rugged landscape carved by retreating glaciers at the end of the last ice age. The closest town of any size is Burns, population 2,806, where you should stock up on petrol, food and water before heading south into the wilderness on the 66-mile Steens Mountain Backcountry Byway. Open between late May and September, the first half of this loop road is gravel, accessible to most cars. Past the Big Indian Gorge overlook, however, the road becomes rougher and a high-clearance, four-wheel-drive vehicle may be needed, even during dry summer months. The road provides access to three campsites and scenic views of the region’s glacially carved U-shaped Kiger, Big Indian, Wildhorse and Little Blitzen gorges. The oddly named Donner und Blitzen river is home to trophy red band trout. 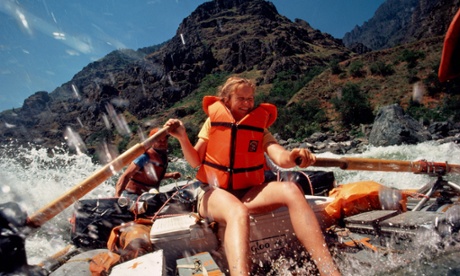 With a name like Hells Canyon, carved by the Snake River, this area in far north-eastern Oregon sounds like a place to avoid, but recreation opportunities abound: white-water rafting, boating, fishing, swimming and more than 900 miles of hiking trails make Hells Canyon downright heavenly. Hells Canyon is the deepest river canyon in the US, deeper even than Arizona’s Grand Canyon, measuring more than a mile and half from river bed to mountain top in some places. The 90m-high Hells Canyon dam, built in 1967, is the largest privately owned hydroelectric power complex in the country. Primitive camping is available throughout the recreation area and cabins are available for rent in the adjoining Wallowa-Whitman national forest. 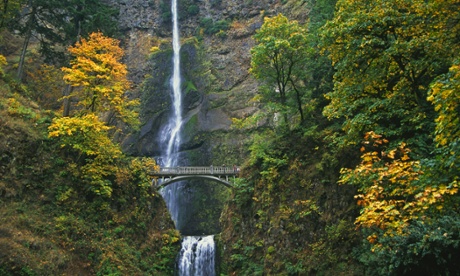 Washington and Oregon are often lumped together as the Pacific Northwest but the two sister states are separated by this imposing gorge. Carved out over millions of years by the Columbia river on its way to the Pacific Ocean, the gorge was scoured down to its current 1,200m depth by a catastrophic flood at the end of the last ice age.

The 80-mile-long Columbia River Gorge is a waterfall lover’s paradise, with 77 falls on the Oregon side, including 186-metre-high Multnomah Falls, the second-highest waterfall in North America, just 30 miles east of Portland. Camping opportunities are plentiful along the gorge and in Mount Hood national forest to the south. Hundreds of miles of hiking and mountain biking trails line the gorge – with adventurous paths plunging over the edge, into the depths. If you can get down to the mighty Columbia river, you’ll find a kayaking, rafting, fishing, windsurfing, kiteboarding wonderland.